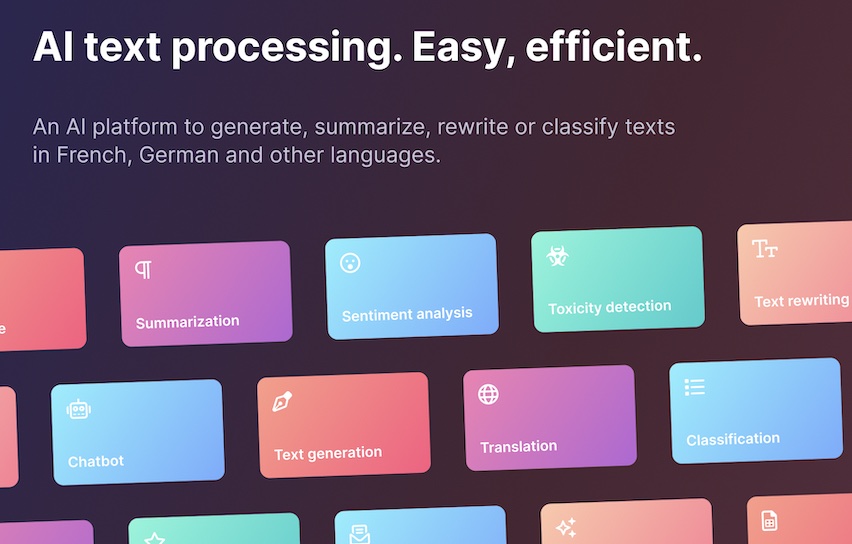 While the Applied Machine Learning Days trade fair is buzzing at EPFL, cedille.ai releases today a German language model that will be a game changing solution in the world of Machine Learning to German-speaking users and companies. Powered by the Swiss digital agency Coteries, based at the EPFL Innovation Park in Lausanne, cedille.ai was successfully launched in November 2021 with the largest French language model available to date.

Any company active in text processing and content generation in German that previously mostly had access to English-trained models can now leverage the largest German language model released to date, available in beta version on our platform.

8 times larger than the current biggest existing German language model, the German version of cedille.ai will give full potential for users and companies in text processing applications such as text generation, summarization, classification, translations or even chatbots.

A comparison to other existing models can be found on cedille.ai’s website. Anyone can test the model freely or request an access to the API to easily integrate in projects.

Similarly to the French model, the new project was launched with support from the Google TRC Program and trained for weeks on Tensor Processing Units (TPUs), custom chips made by Google to speed up AI computation.

Cedille.ai stands on the shoulders of the open source community EleutherAI, a grassroot movement of open source AI researchers.

Back in November 2021, Coteries launched cedille.ai, a new artificial intelligence for text generation specially trained in French. To date, cedille.ai remains the largest language model in French and performs better at certain tasks than GPT-3, the multilingual reference in the field.

Many media outlets have talked about cedille.ai in Switzerland such as Heidi News, 24heures, 20minutes, Bilan and Startupticker. Even Radio-Canada, a radio station from Quebec, mentioned the project. Cedille.ai was also featured by several Twitch and Youtube influencers in the field representing millions of viewers, such as Science Etonnante, MonsieurPhi, MiCode, and Yannic Kilcher.

This first model launched by Coteries in November has been a huge success : more than 25,000 users registered online, generating over 1 million pieces of content so far, either through the playground or through the API launched in December. Cedille.ai has already established itself as a qualitatively superior alternative to OpenAI's GPT-3 or GPT-J for French.

From enhanced journalism to autocompletion and chatbots, the new German model offered by cedille.ai brings endless usage possibilities. Cedille.ai’s models and skills for custom applications will be especially relevant for any company desiring to leverage Artificial Intelligence to process content in German, including content generation, classification or summarization.

Towards the democratization of AI availability for content generation