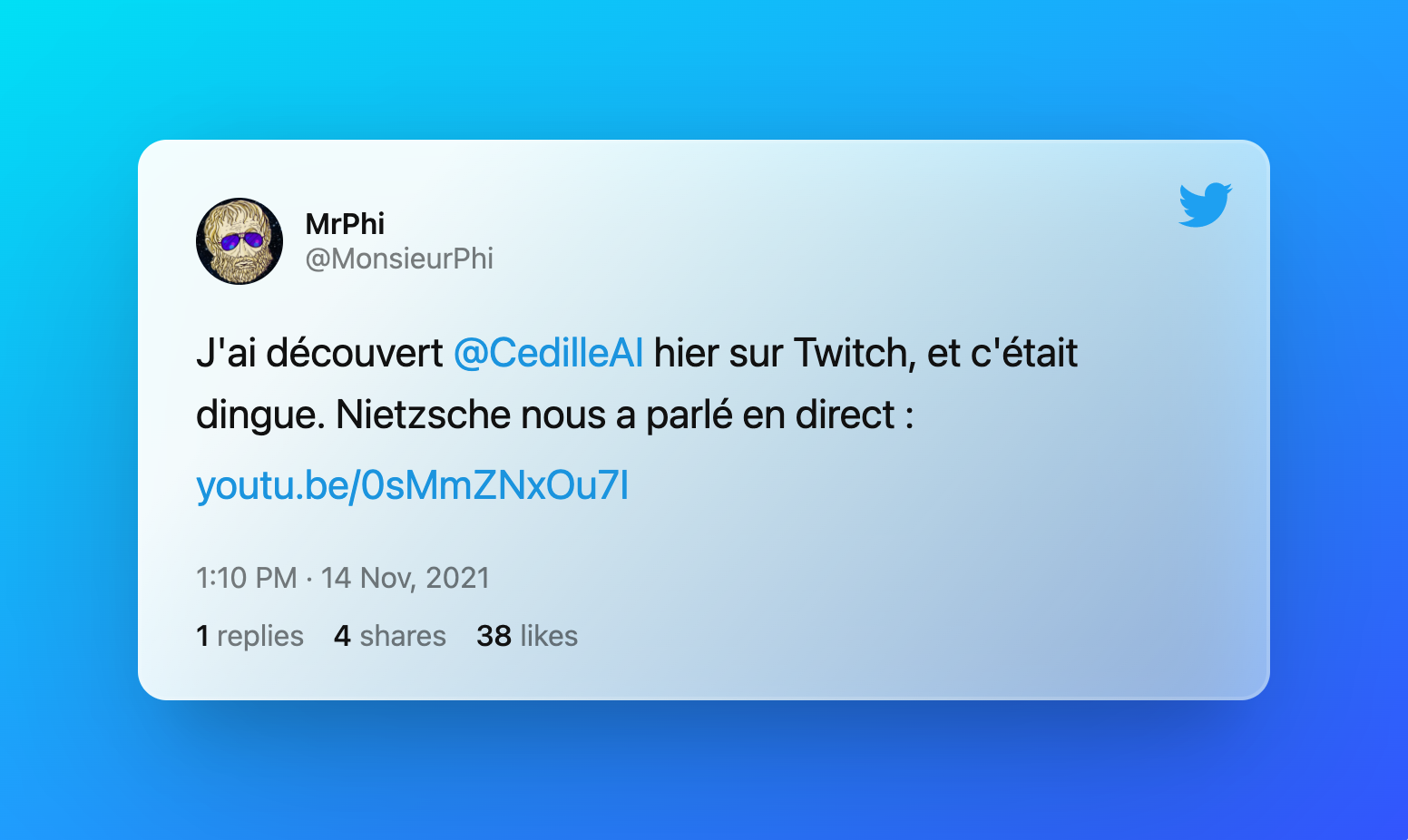 Reactions and criticisms: a look back at the launch

On November 9th, we publicly launched Cedille, the largest language model in French to date. We took the decision to propose playground accessible to everyone in order to let the community discover the model freely. So far, more than 90,000 texts have already been generated, including philosophical speeches, poetry and many other interesting directions.

We've had amazing feedback on Twitter as well as some criticism on the content generated on cedille.ai. Below are some examples of the model's capabilities:

French philosophy professor and Twitter user MrPhi did a Turing test on Cedille by making it write Nietzsche. Journalist Agar (@akaAgar) wrote that Cedille works very well with journalistic formats and would want to use it to create a gazette of imaginary news.

Another user prompted Cedille with a sentence from one of their games, and tweeted that there was an enormous potential for role-playing games with the model. Other usage cases were feeding it with the first line of the wikipedia page Dofus (an online famous role-playing game), or providing their workplace’s mission to produce a catchphrase.

With more than 1’000 accounts created, there was quite some testing during the first weeks!

Transparency in the heart of our preoccupations

As a project still in beta, part of making it freely accessible is to allow anyone to play with the model, to have the public test it out and provide feedback. Criticism about some of the content generated is justified. Although we have put in a lot of effort to reduce toxicity and it resulted in a measurable improvement, there is still a lot of work to be done. Our position is that transparency towards the community remains one of the most important points of the project and that it outweighs the potential risks incurred due to content deemed inappropriate.

The majority of large companies in this field no longer provide access to their models at all, for fear of this type of reaction. We think it is better for the public to be aware of the developments and risks in this field.

The model is available as open-source, allowing other researchers in this field to use it to analyze these types of results. We hope our approach can benefit researchers in finding solutions to toxicity problems, we are aware of the risks and we are working hard to mitigate them.